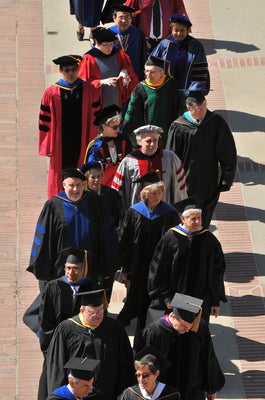 The Academic Senate is one of the distinctive organizational elements of the University of California – a feature that distinguishes it from other major research universities. The University of California’s 1868 charter called for the establishment of an “academic senate” consisting of all faculty and deans, presided over by the president. The Senate, stated the 1868 Organic Act, was “created for the purpose of conducting the general administration of the University.” The organization of the Senate and its relationship to the university president and the governing board, however, was the prerogative of the Regents. Codified by the UC Regents in 1920, the Academic Senate is the vehicle through which faculty share in the operation and management of the university. UCLA’s contemporary practice of consultative decision making and shared governance reinforces the notion that faculty are at the heart of the academic enterprise of teaching, research, and public service and critical to maintaining the quality of the university’s academic programs. The Senate is delegated authority over such matters as degree and enrollment requirements and program establishment, disestablishment, and review. It also has a formal advisory role in academic personnel actions and a myriad of other matters. The Academic Senate’s efforts derive from the premise that the university’s excellence is sustained by faculty, administration, staff, and students all making substantive contributions to the university in an involved, respectful, and collaborative fashion.

Reflective of the principles of shared governance, the Academic Senate structures itself to support the mission of the university by facilitating optimal communication and cooperation between the faculty and the various components of the university, enabling informed and inclusive decision making, and serving as a consultative body to other constituencies on all matters pertinent to the well-being of the university. The Academic Senate represents the faculty in all matters dealing with shared governance. Its leadership consists of the Senate Chair, who serves a one-year term, the Vice Chair (Chair-Elect), and the Immediate Past Chair.

Read more about Shared Governance in the University of California.

The Committees of the Academic Senate

The UCLA Academic Senate fulfills the duties delegated to it by the UC Regents through the participation of faculty in its various committees and in the Legislative Assembly. In 2020-2021, the UCLA Academic Senate consisted of 3,818 members of whom 2,499 were non-emeriti. A few of the more prominent standing committees are highlighted below. For a full list of committees and councils, visit: https://www.senate.ucla.edu/committee.

The faculty at UCLA is represented in the Academic Senate through its representatives in the Legislative Assembly (LgA). The Legislative Assembly is empowered to act in all matters for the Los Angeles Division. Members of the Assembly consider campus-wide issues like approving the establishment or disestablishment of departments or degrees, the creation of majors and minors, etc. Each year, members of the senior administration of UCLA attend the LgA to brief the faculty on current affairs affecting the campus, strategic initiatives, and a host of other issues and trends facing the University. The Chancellor, Executive Vice Chancellor, and Vice Chancellors commonly appear at the LgA meetings. The Legislative Assembly meets four times a year.

The Executive Board functions as the official advisory agency for the Chair of the Senate.  It coordinates and reviews actions and proposals from Senate committees and administration.  It is also empowered to act on all matters, except legislation, in the name of the Los Angeles Division at times when the Legislative Assembly cannot readily be convened or when haste is required.

The Council on Academic Personnel (CAP) is a standing committee of the Academic Senate. Each year, its members thoroughly review the dossiers of hundreds of faculty. The CAP is responsible for the review of all significant personnel actions involving employees of UCLA holding academic titles. CAP's charge is to maintain standards and equity across the campus. CAP’s role is strictly advisory, although its opinions, expressed in reports, are given considerable weight.  According to current practice, the Vice Chancellor of Academic Personnel will not make a decision that is inconsistent with the recommendations of CAP without informing the Council.

The primary mission of the Committee on Diversity, Equity, and Inclusion (CODEI) is to provide advice to the University Administration on policies/programs to advance faculty diversity, including the recruitment and retention of women and underrepresented minorities. The Committee administers the annual Diversity, Equity, and Inclusion Awards, and provides advice to the Academic Senate on issues relating to diversity and equal opportunity in the University community.

The Council on Research (COR) is charged with providing periodic evaluation of units that support faculty research  It also formulates general guidelines for review of Organized Research Units (ORUs) and makes recommendations to the Vice Chancellor for Research based on ORU review reports. COR  administers the Academic Senate’s Faculty Grants Program. COR establishes policies and procedures governing the allocation of funds within the purview of the Faculty Grants Program, for the conduct of research and for travel to attend scholarly meetings. Each year COR and the Faculty Grants Program Committee (a sub-committee of COR) distributes over $1.4M in grants to Academic Senate faculty in the form of travel grants, Research Enabling Grants, and Faculty Research Grants.